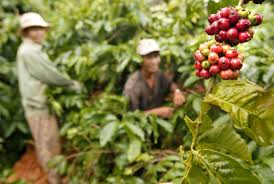 Green Land Coffee Plantation was founded by U Sai Wan Maing in 1999 after selling his rubber plantation. It is located in Pyin Oo Lwin, formerly Maymyo, a scenic hill town known for its botanical gardens and examples of colonial architecture. Rising from the central basin, it is contained within the Shan plateau at 1150 metres above sea level in the east of Myanmar and forms part of the Indo-Malayan mountain system.

Green Land is one of Myanmar’s largest coffee plantations, starting out as 30 acres with a rapid expansion in the first three years to becoming over 580,000 coffee trees grown on 450 acres. The main variety grown is known locally asCosta Rica, though in reality is a Catimor from Costa Rica. The plantation produces many varietals of arabica and the beans we have in stock highlight this with their depth of flavour.