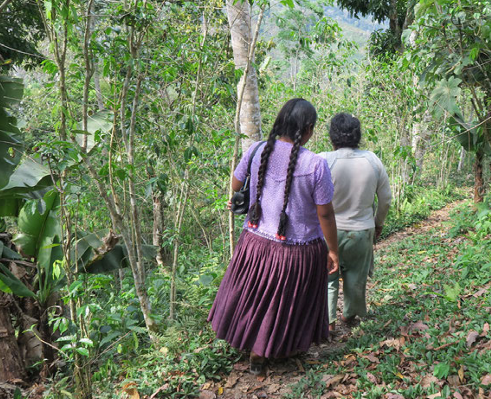 Overcoming a variety of barriers, including geographic isolation, rugged terrain, and a traditionally lower status in society, the women of the Café Femenino Bolivia Program have successfully improved their coffee-producing livelihoods, their future prospects, and the health of their families and communities.

It all started in 2009, when the women separated their coffee production from the men’s, created a women’s association, and started their own Café Femenino Program in Bolivia. One of the first advancements the women in Bolivia achieved upon joining Café Femenino was having their names included on the titles to their land. This may sound trivial, but by doing so, the land remains with each woman if she becomes abandoned or is widowed, thereby providing protection from further poverty for herself and her children.

Psychologically, this act instills a sense of value and ownership over each woman’s livelihood and business. This is a powerful means of creating self-esteem for women who are accustomed to being viewed as servants to their husbands.

The women have reported a host of positive changes in their lives and their communities since joining Café Femenino in 2009. For them, the most valuable change is their successful creation of a cooperative space in which all women have educational opportunities and the chance to have their

voices, ideas and opinions heard at the highest level of leadership.

The changes these women have fought for have taken them far from the positions of inferiority and subjugation from which they started. Beginning from a place of low self-esteem and self-worth, the women of the Café Femenino Bolivia Program now view themselves as business women in charge of

their own destiny. And with the control of their own money, they have the ability to funnel their resources in the direction of their children and their community.